Just an overview over the course 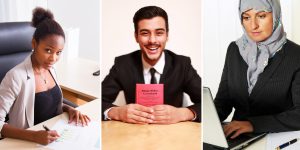 Migrants can take this course because they have a lack of or non-sufficient knowledge of read-and-write competence.

Test of classification
Whether taking part in such a course is necessary will be tested by an initial talk on competence within the framework of getting into the courses of integration.

Lessons per week
Maximum number of lessons per week are 25, whereby one teaching lesson always lasts for
45 minutes.
Just like with every integration course, several course modules that are linked together in a rising order will be performed witin a range of 100 teaching units each.

The course can be continued with a further 300 units called

After that, which normally means after 1200 teaching units, the

For practical reasons, the common re- an alphabetising of all the partaking member of alpha-courses (primary, functional, learners of a second language) is being preferred.

Number of course members
Because of the experiences we have made so far with alpha-courses with male and female migrants and under consideration of our experience with German functional an alphabets, we think the number of course members of 16 shouldn’t be exceeded. Members of a course of integration including teaching literary skills can be divided between members by their knowledge of read-and-write, speaking and their life-situation. We recognize a link between the biography of learning and the read-and-write knowledge. A person who has gone to school is clearly to be differentiated from a person who has never seen a school from inside. The speaking capabilities of the partakers vary a lot. Sometimes, there is hardly any knowledge of grammar existing.

Who can take part in this course?
On the one side, there are people who have never seen a school from inside, don’t have any experience about holding a pencil, and, at the same time don’t have any knowledge of German and only have a very small sort of experience about their own way of how to learn their mother tongue. On the other side of the box, ideally, there are functional an alphabets that have gone to school for several years, have been taught literary skills, but in a non-Latin script-system. (Learners of a second written language).

Final exam
After having reached the proposed amount of teaching lessons, the members of the course sit a final exam. The level of getting a language certificate A2-B1 should be successfully passed according to the common European standard (EFR: Common European Framework of Reference), together with the DTZ (Deutsch Test für Zuwanderer) with in English means ‘Exam for German as a second language for migrants’. Continued by the orientation test a republic-wide test will be performed concerning the items ‘Politics in Democracy’, ‘History and Responsibility’ and ‘People within society’.